As I said in the last post Kevin stayed back at the house Thursday while the rest of us went to Blue Springs Park to see the Manatees.  The contractor was here with his crew to begin the tear down of our old screened porch, to reinstall the enclosed sunroom that will make this space very functional.
I took some before pictures and then as they began the tear down.


They put up the structural posts, and redid the ugly popcorn ceiling with the vinyl overlay while we were away and have taken the measurements to order the windows and doors.  Once these are done they will return and install them along with the insulated walls so the room will go from just a screened porch to an enclosed usable room space.  We will be able to get a lot more use from this.
I'll be happy that the opening between the porch and pool area will be closed off for the safety of kids and pets, but will be a light and visible space for seeing into the pool area.  Going from the bronzed finish to the white already has it looking much better. 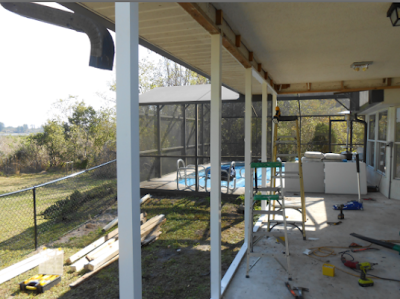 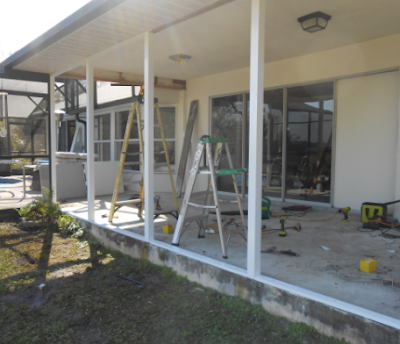 Kevin took down the ugly outdated lamps and we'll put up some light ceiling fans for moving air around and lighting.  This project should be completed once the windows are ready in two weeks.

Last night we had a BBQ over at Patrick's house where Steve and his family are staying while down here visiting.  The kids swam while we visited and then we all enjoyed a nice dinner prepared by Steve and Janice.


Yesterday Kevin's brother Steven, his wife Janice and their sons Stevie and Shane arrived from Pennsylvania for a short visit during Spring break.  We had a chance to visit for a few hours then, but  today planned an outing to a park near here we'd been wanting to visit but haven't had a chance.

After Steven called the park and found out there were still Manatee there we headed over to Blue Springs park.  It's the winter hangout for a lot of Manatee because of the warm water that comes from the hot springs that feed into this watery inlet off the St. John River.  When we arrived at the parks gate the sign read there were 121 manatee there today. 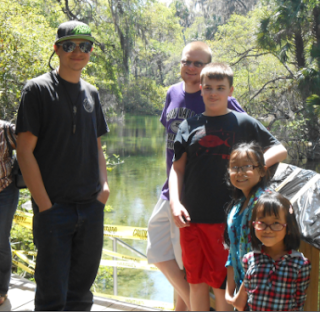 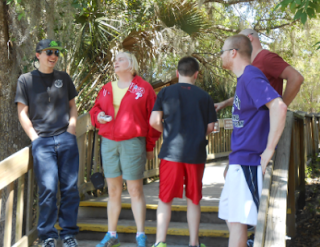 They have a wonderful hiking trail that runs the length of the inlet.  I was amazed at how clear the water was. You could see the Florida Gar fish in there, and then when we spotted the manatee it was really something to see them so clearly.  There were large mouth bass closer to the St John end of the springs and Tilapia as well.  We saw a couple large alligators sunning themselves on the other side of the springs, though my pictures of these didn't turn out that great. 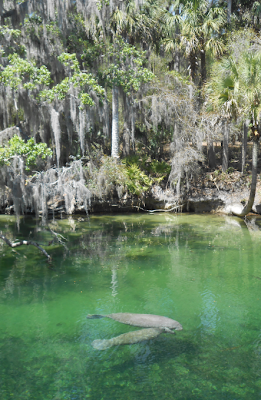 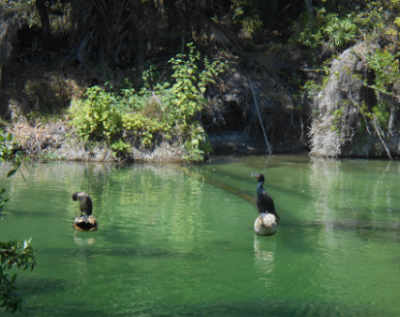 There is an old house that was owned by the Thursby family.  They bought 300 acres in 1856 for $400.00 and eventually built the house and a boat landing used by boats that stopped there as they travelled on the St. John river.  It was a really pretty location and was probably incredible in it's day to live in.


Kevin didn't make it today with us.  He was home since the contractor who is working to replace our not so functional screen porch with an enclosed sunroom arrived today to do the tear down and initial installations of support posts and basic structure.  They will order the windows and complete in a little over a week once the windows arrive.  The change will make for a really functional space and a much safer one for kids and animals as we'll have doors and windows to seperate the space from the pool area.  I'll post pictures of this in a later post.

We continue to make progress with our unpacking and setting up our household here in Florida. This month has been a blur of cleaning, painting, unpacking and trying to find places to put what we've unpacked. We finally see more carpet as the boxes disappear in the living room.


As we worked Saturday the skies opened up and poured.  We got a good amount of rain and late in the afternoon the power suddenly went out.  It was fine during the day as we could see.  I had to search through our stuff to locate some candles since when calling the power company we learned a failure in a substation had occurred and we'd be without power for some time.

As evening moved in Lauren headed off to bed and a little later Hannah got her PJ's on and her glow stick ready to act as a night light.  The candles added a nice atmosphere as Kevin had his music collection playing through his I Pad.  It made for a pleasant evening.

Monday Hannah's furniture arrived at the store so we headed over to pick it up along with book shelves from Target.  Kevin and Cameron worked to get her furniture together and her little kitchen unit.  We began to fill the drawers, shelves and the armoire as the girls played.

The room is coming together though it's still crowded since both of the girls are together in Hannah's room.  Lauren's mattress is in there until we can make arrangements for Cameron to have his room.  Our plans have been delayed for his "shed room" to come together as things have been slow in the counties planning and permits departments.  We live in an area that's considered an  "enterprise overlay" area.  That means specific design features are needed for the look of property additions to line up with the areas "historical" features.  Though truthfully there is such a mish mash of styles in this area it seems like city planning after the fact.  Our plans were finally approved today so tomorrow we will head over to the shed manufacturer and complete our order.  In the meantime Cameron is camping out in Lauren's room, while the girls share Hannahs room.  Everything will be decorated and in order in time, but for now we continue to create some order out of the incredible disorder that's been our norm since arriving.

We are getting to a place where we can find things a little easier and that's been a huge help towards getting order back to our schedules.  The girls are back to a schooling routine and with the time off for travel we aren't taking a Spring break.  Our sleep patterns are finally becoming normal as they've been off, particularly for Kevin and I with all the months of preparations, travel and then trying to get settled.  To REALLY be able to sleep again has been wonderful!!

So we keep on keeping on and and making progress at creating order from disorder.  With all our outings to get supplies we are really starting to learn our way around this city.  I am very thankful for the GPS though, as it's made things far easier. That's it for now.  More updates and changes coming soon!!


Grandma came by this morning to take the girls and Cameron to serve as photographer over to their favorite park where the Sheriffs  Department hosted an Easter egg event for the neighborhood kids.
The pictures speak for themselves as they had a lot of fun. 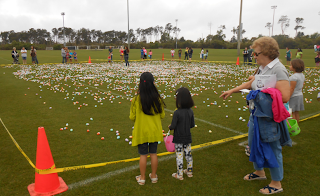 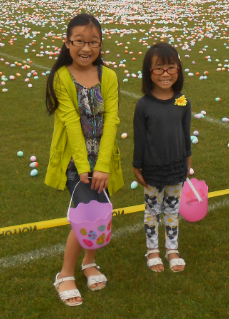 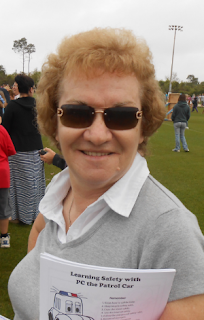 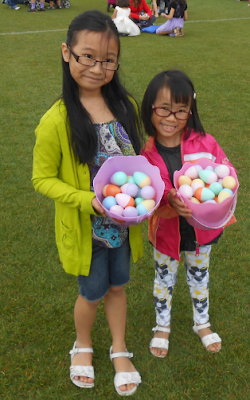 After the eggs a magician was performing and Cameron was picked with some help from Grandma and Hannah who pointed him out to participate, after initially being seated on buckets along with three other men their buckets were all pulled out and they "magically" held each other in place. 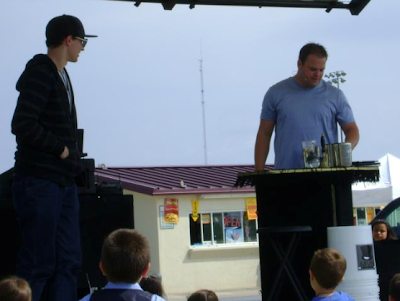 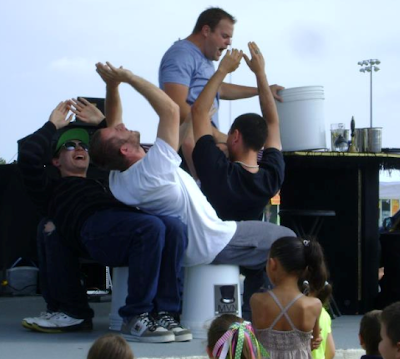 They all had a great time and came back with a bucket full of eggs and treats each. 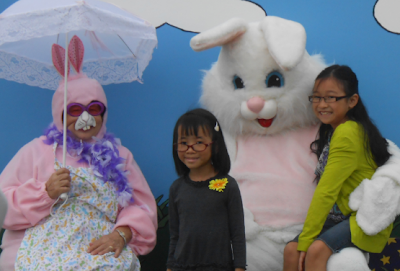 We've continued to get the house together as Kevin put up Lauren's closet organizer, he and Cameron have most of his office furniture up and in place and our first picture went up on the wall. 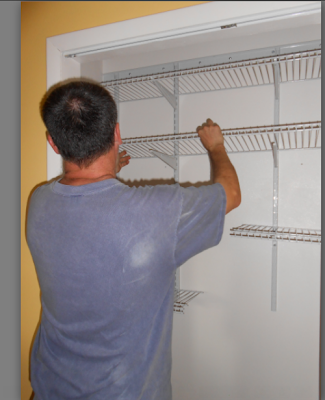 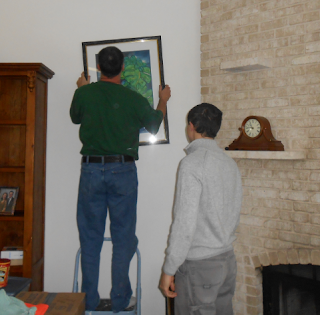 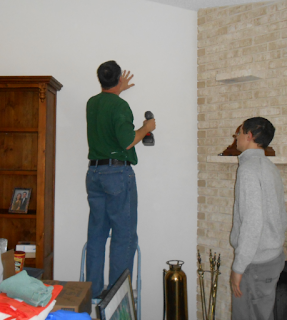 I've started painting a vanity that was my grandmothers.  The old finish was a dark mahogany stain and to get it shiny white to match the furniture we've ordered for Hannah's room is taking a bit of work. 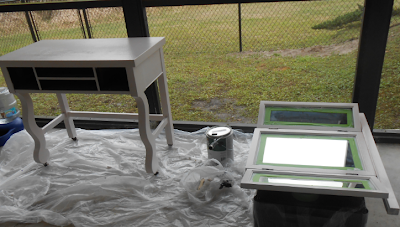 Laurens room is now painted in a sunny yellow and we've ordered a new bed frame for her and are looking for other items to complete her room.

Kevin also painted some of the space we've managed to open up in our very overloaded garage and is setting up some shelves to help me organize our items that we don't have space for or cupboards inside, but need to be able to find.