Life After the Storm


When Hurricane Matthew roared through Florida at the beginning of this month we had our first taste of battening down the hatches here in Central Florida.  We added extra tie downs to the chicken coops, picked up yard items that might blow or cause damage if they became air born.


Since we are on a well we always have stored water for possible power outages, but we stocked up on extra in preparation for the storm. We'd already topped off the vehicles with gas, had food stocked and picked up extra propane for the generator and gas grill.

Thankfully we were blessed when prayer was answered and the storm moved further off the coast and didn't take the original course of coming right up the center of Florida as it first looked like it would. It hit us at a Category 3 with sustained winds of over 80 mph and brought with it loads of rain!!!  It poured and blew all Thursday and on through the night. At 3 in the morning on Friday the main part of the storm had passed us by, but we lost power.  It would stay off until Sunday night when at 8 pm it came back on.

We were really glad we had the preparations of extra water, food, batteries and most of all the generator.  We ran it to keep the refrigerator and freezer going and some fans when the afternoons became uncomfortable.  At night we used our candles and kept in touch with news with our storm radio.

After the storm passed we were really glad to see that damage was minimal considering what could have happened if we had been hit with what they originally expected to come through. We had a smaller oak topple in the yard, so we cut that up and cleared it out ourselves.


My banana leaves were shredded and one of the larger ones couldn't handle the strong wind and snapped in half.  So I cut that down to make room for the pups around it to grow.

We have a large pine in amongst the pine trees that has fallen over and will have to be removed later when the tree companies aren't as busy as they are now.  Since it isn't endangering anything we're not so concerned. 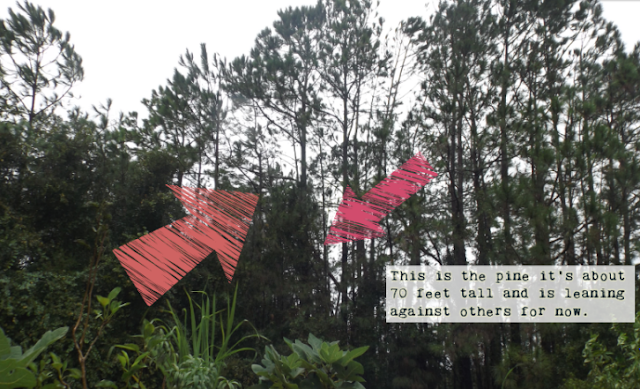 We lost a couple of panels in the roof area of the pools screened porch, so that will need to be fixed.
Then there were potted plants blown over and evidence of lots of leaves blown down, but all in all not much damage.  We've been raking up the pine needles that were all over to put on the floors of the chicken coops, because with all the wind and rain there was about 4 inches of water that made for a very muddy coop area.  The pine needles worked well to create a decent flooring as everything dried out.

So with the cleanup done we'll make note of ways to prepare in advance of an event like that again through storage items and as we continue to create our edible food forests and gardens so that they can take care of themselves in the future.

We are now in full swing with our Fall planting to be able to enjoy the many things that grow well in the cooler temperatures we enjoy in our almost year round growing environment here in Central Florida. I'm busy starting seed to replant the hoop house with the hydroponic systems that I've dismantled to clean and as we put down new flooring material in there. So I'll update on that as it progresses. The girls and I have been harvesting our peanuts and and preparing those beds for new plants.  Cameron wants to make peanut butter with the peanuts we've harvested.  I'll do a post on this once we've finished with this project.  That's it for now.  Will post on some of our harvest soon.