A week ago today we were hunkering down as Hurricane Irma was afflicting Florida with her nastiness.  We had watched for a week as it moved through the islands gaining and losing strength and changing course repeatedly.  The news was full of potential paths she would take and how hard Florida would be hit once she arrived.  We took measures to prepare the house, property, animals and ourselves for the hurricanes arrival.  We chose not to evacuate and felt safe enough here since this property had already weathered extremely strong past hurricanes and held up.

Still taking care to remove everything that might take flight, to try to secure more vulnerable items or assist trees and plants that weren't as strong.  Including all my bananas, several that were finally bearing fruit along with some papayas that were heavy with ripening fruit.

We added extra tarps to the chicken coops to keep some of the extra wind and rain from blowing in and then put stakes in the ground and ran wire over the top to prevent the winds from picking these up and breaking everything apart.

With stores out of plywood Kevin looked online for alternatives to protect the windows.  He found "hurricane curtains" for sale that are made from a heavy plastic covering and were rated for the intense winds.  With no time to order these he decided to be creative and make a version of his own.  He took the Tyvec Wrap we had and made lath frames that he wrapped several layers over and then attached these to the exterior of the house to give protection to our windows.

We moved potted plants closer to the house where they wouldn't be as exposed to winds.

We still had 3 of our chickens in a tractor, so we added extra tarps and like the main coops tied down with wire and stakes.


With all our supplies and water, along with extra fuel for cars and generators we kept an eye on the news as the hurricane moved into Florida early Sunday morning. All day long we watched as the path of the hurricane zig zagged and never stuck to the path they thought it would take.  By late afternoon the first rain squalls began here. 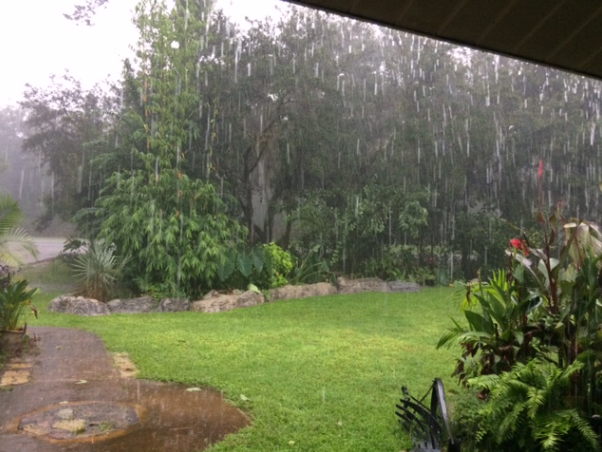 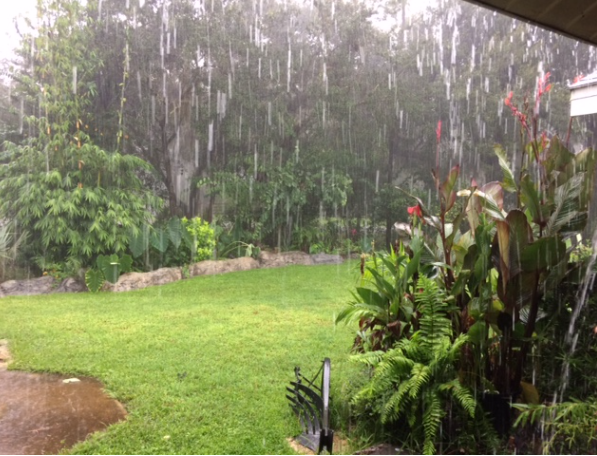 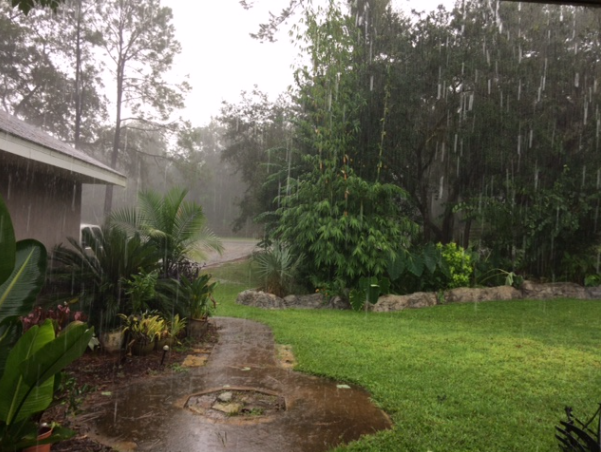 Then around 8 p.m. the heavier winds began to hit.  The kids got a bit frightened with some of the initial winds and rain blasts, so we turned news off and put on praise music and gathered to pray as a family.  The kids settled down and even went to bed a couple hours later and slept through the real intensity of the storm.  Kevin and I kept vigil and watched again on the news the changing path this weird hurricane was taking.  For awhile we thought it would miss us with the worst of it, but then it moved over and around 3 am the corner of the eye came over our area with sustained winds of 80 mph and gusts over 100 mph.  I watched from the small windows by the front door as the winds bent the trees and bamboo way over.  As branches flew around and could be heard hitting the house.

At 4 am we heard loud thuds on the side of the house that the garage is on.  Three of the six solar pool panels had let loose and were swinging back and forth.  We went out and while I tried to hold it steady Kevin took cutters to cut through the pipe so the remaining panels wouldn't be pulled off as well. We then had to separate the loose panels and get them on the ground then weigh them down so they wouldn't become airborne. Admittedly it was scary out there with the noise of the wind and all the flying debris.  I was glad to get this done and get back inside.

The worst of the winds past us around 4:30, but  we still had windy conditions until around 11 am on Monday.  With only about an hours sleep we went out to look around at the state of things on Monday.  Pine branches and boughs littered everything.

My bananas were all gone, and papayas were damaged.  My barbados cherries and loquat tree were all leaning and needed to be pushed back into position with extra dirt added to hold them. 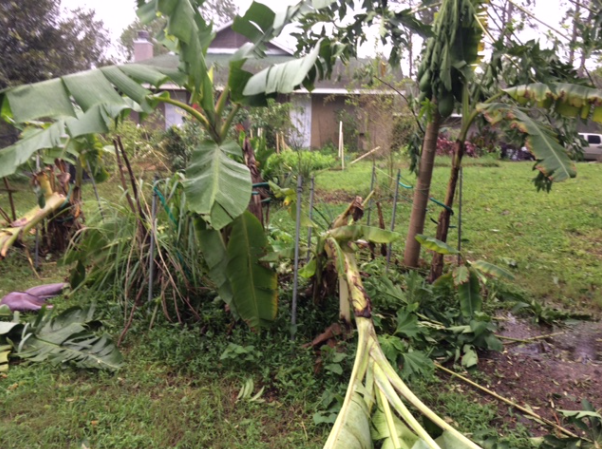 The chicken coops had made it through, but the ground water level from Big Lake that's behind us had risen from the almost 10 inches of rain we got and there was about 6 inches of standing water in the coops. We began to take the fallen pine boughs and put them on the floor to give them some dry ground to walk around on so they didn't have to stay on the roosting bar all day.


As I walked around looking at the damage, I was so thankful to still have electricity. We lost power during hurricane Matthew for 4 days. And despite the intensity of this storm we were fortunate to only have minor damage of the loss of the solar panels and a couple of screen panels from the pool enclosure. Everything else was debris from plants and trees, and though all my bananas were gone and I had to cut down some of my papayas, these will grow back.


After working in the yard a bit I walked back towards the house and saw this rainbow in the sky.  I'll take it as a sign of protection and promise. 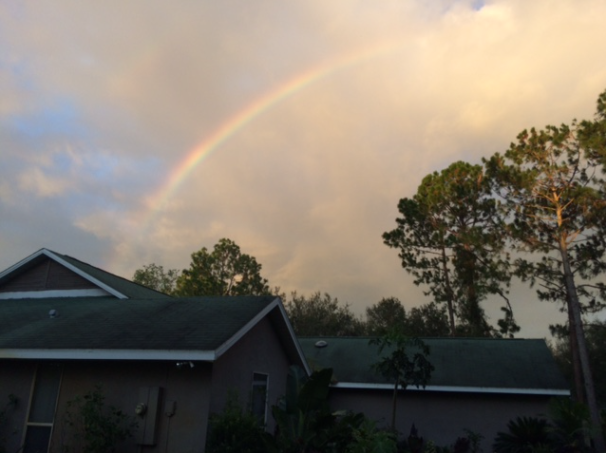 So now after a week, with internet service back I can post this and say the clean up still continues. I'm paying attention to which trees and plants faired best and keeping this in mind as I plan more landscape ideas and their placement for the future. We're also keeping our eye on the news as other hurricanes still loom out there with the possibility of affecting us. We'll take this as it comes and keep on keeping on with our little homestead.