When we were still in California we had taken Lauren in to visit the orthodontist that did the braces for our oldest daughter Amber and son Cameron.  At that time Lauren's permanent teeth were rapidly coming in, but the baby teeth hadn't come out and she had 2cd and 3rd rows of teeth.  The orthodontist insisted that it would be best to let nature take it's course and just have her work on the teeth that were loose. This orthodontist agreed that this would have been the best course at that time. She has incredibly durable roots because 3 years later we're still trying to get those baby teeth out.  Most have come out, but there are still 6 that are holding fast and forcing her new teeth way out of where they might come in, so this orthodontist gave us a copy of her X-rays and a prescription to take to a dentist to have these removed. 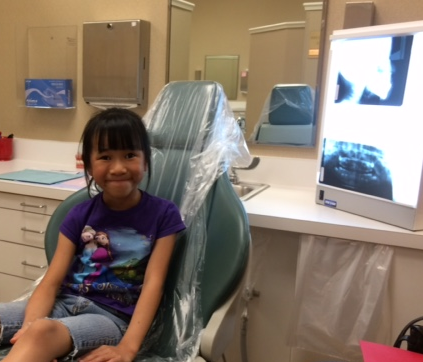 Hannah has a few teeth that are out of alignment, so we thought we'd have her checked out for early intervention.  We were surprised to learn that despite the large size of so many of her teeth, there are still LOTS of baby teeth that need to come out.  He was really pleased with the size of these, because they will allow room for the new ones and he said just let nature take it's course.  I was glad to hear and see this because I thought most were permanent having lost count of how many teeth Hannah had lost when so many were falling out a few years back.  Truthfully, I would have been in a panic thinking she was losing permanent teeth without this info. 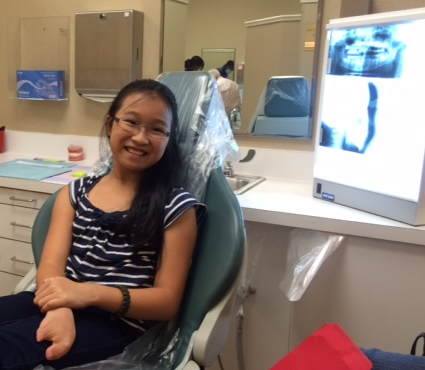 So we need to get Lauren to the dentist then let a few months pass for things to settle and possibly move before the Orthodontist wants to review her status.  For Hannah, he said let at least 9 months go by and we'll check in and see how things were doing.  Not having to start the expense of Orthodontics right now was a pleasant surprise and knowing the girls are still on track to have healthy teeth and pretty smiles is even better.

So for now braces are still a ways off.  Both girls were happy about this even though they see the value of them.  Can't say I blame them after having had them myself.

A week and a half ago we received a call from our son, "Mom, I've had an accident".  Deep breath here, okay he's calling so that's a good sign.  I asked if he was okay and he said yes so was everyone else, but the car wasn't.  I told him cars can be replaced, I was just glad the people were okay.  He said where he was and Kevin headed over because from the sounds of it he'd need a ride home.

Turns out it was in an area of construction and when a construction vehicle pulled out suddenly from the side of the rode it caused a chain reaction of braking.  There was a large landscaping truck in front of him who quickly pulled to the right to try and get off the road as he hit the break, so he didn't hit the car in front of him.  Cameron had a barrel barrier on the right side of him and oncoming traffic in the narrow construction lanes so as he hit the brakes the right side of the car clipped the back left side of the truck.  Things would have been okay if that was all that happened.  The truck was like a tank and didn't sustain damage, and Cameron's right side would have needed fixing.  Unfortunately that wasn't the last of it.  As the truck pulled further up and off the road, Cameron turned to move in that direction and was struck from behind by a woman who hadn't seen the vehicles stopping.  Her car pushed the front of our Vue right into the side back panel of the truck, again not showing any damage to this tank of a truck, but crushing in a large V pattern the front of the VUE and the front of her car. 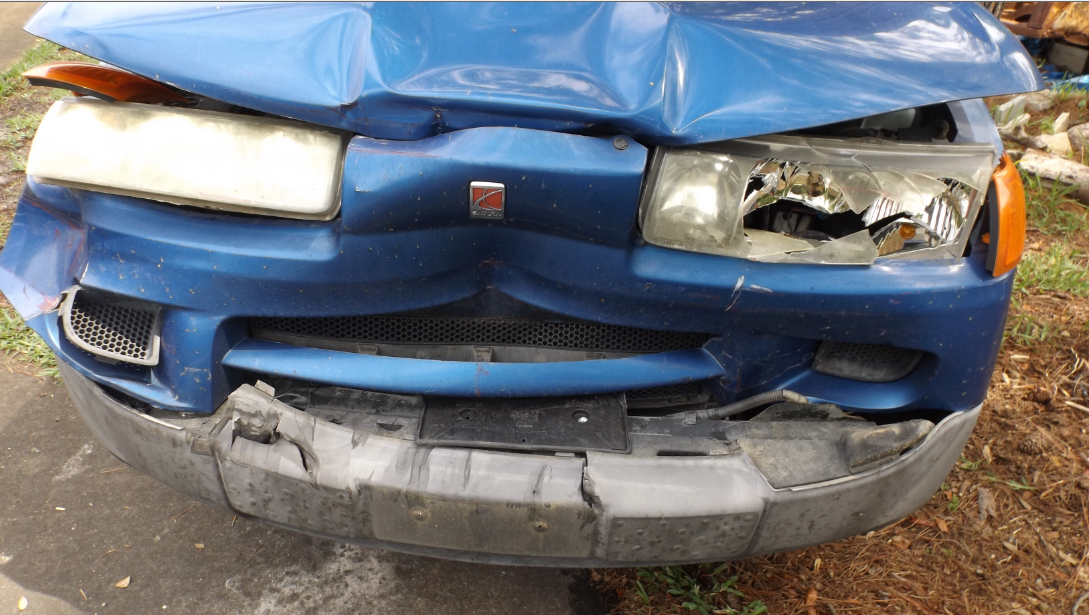 Kevin waited with Cameron as all the reports were taken and the tow trucks arrived, then drove Cameron home as the tow truck dropped off our poor car. 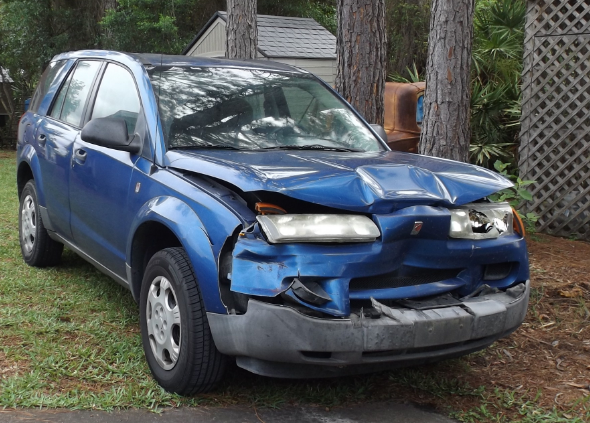 Despite the fact it has low mileage and the engine wasn't damage, there was so much front end damage and  with the age of the car (a 2003), and the fact that they don't make Saturn's anymore the insurance company totaled the car.  Truthfully not unexpected by us, so we'd already started checking out our options.  After a couple sleepless nights, too much thinking and searching online, we used our insurance companies buying service to shop for the model we picked out as our best option, and went to the local Ford dealer for our new Fiesta.


As the title says '"accidents happen", and thankfully everyone walked away from this one for which we are very grateful!!

This has been a busy month building garden beds, the hoop house over our tower garden and vertical garden system, hydroponic systems using the Kratky method and still completing the fireplace.  I'll post pictures of our other projects as we complete them, but since I'm so behind in updating this blog I thought I'd share a few pictures of some of the pretty flowers as plants and trees in the yard begin to bloom. 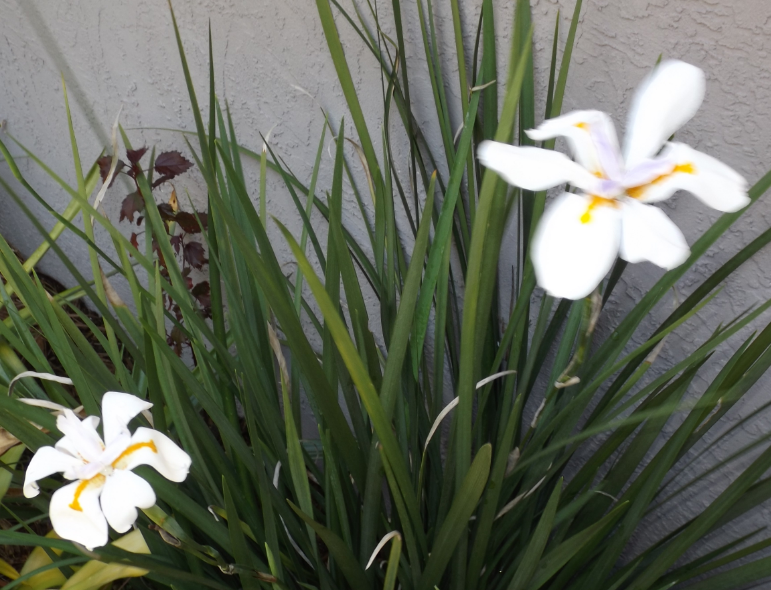 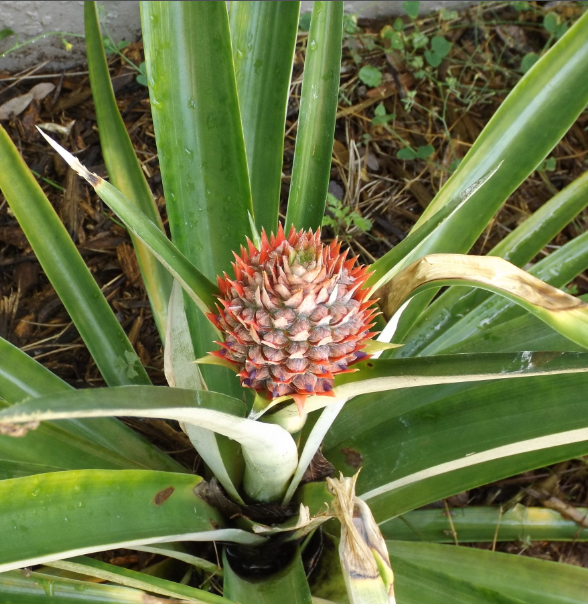 That's it for now - happy gardening!! 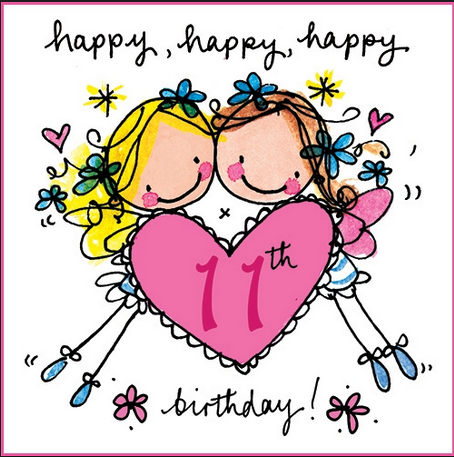 Today is Hannah's 11th birthday!!  Can't believe how fast time flies and how grown up she's becoming.  We've had to work around Cameron's crazy busy school schedule in order to include him in birthday activities.


Since new classes started for him just Monday we weren't sure what his schedule would be until late Sunday afternoon.  Originally we thought he'd have the day off and wanted to plan a family outing, but sadly he has class today, so with Hannah's okay we had a pizza dinner and cake last night, and we'll let her open Cameron's gift before he has to leave for class today.


Then to celebrate we're taking the girls to see the new Cinderella movie.  We've heard it's good and it should be a lot more fun than school work, so we'll make up school later and enjoy a birthday out. 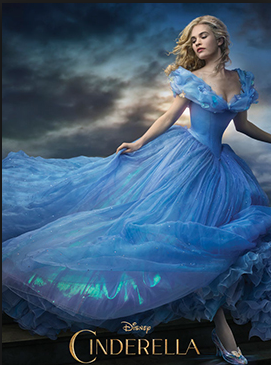 On Sunday Hannah had her violin recital a day she's prepared for these past few months.  All the practicing, the two rehearsals with the other kids and the nerves were coming together for this performance.  She was both excited as well as dealing with the butterflies in her stomach.

After the first 8 kids played it was Hannah's turn.  They had all just met once with the pianist the day before and while the piano accompanying the students added to their chosen pieces, it also served to throw many of the students off a bit and Hannah was one of those.  All of them rallied to push through and complete their pieces which was really impressive.  Hannah played the theme from Jurassic Park for her solo.


Following her solo were 6 more solo's, a trio of two violins and a cello playing together and a quintet that played a country piece called Johnny's Hoedown that was a change from many of the more classical pieces of the day.

Then it was time for the group to perform the William Tell Overture.  This was something Hannah was really looking forward to, but was concerned with holding up her part in the orchestra.  Here is a video of their efforts, Hannah was so excited at the end that she can be seen jumping for joy. 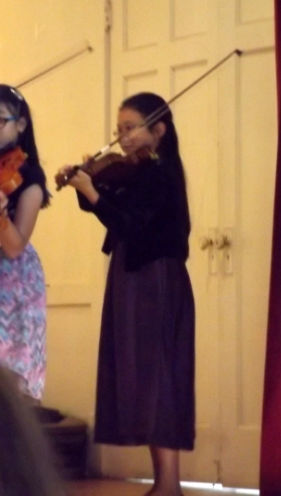 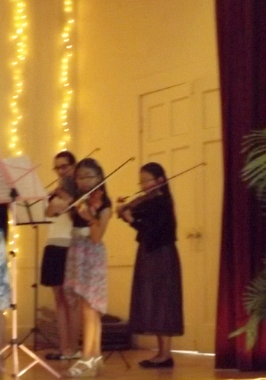 The final two pieces were played by their teacher who played the kids choice of Let It Go, from Disney's film Frozen and Vivaldi's Four Season piece Winter.  With that we ended a wonderful day.
We surprised Hannah with flower, purple of course, at the end and gave her a bouquet to give to her teacher for all her efforts.

Hannah's relieved to have this over, but also a bit disappointed that she doesn't have anything to prepare for and look forward to.  We've assured her there will be plenty of more opportunities in the future as this is something she loves and wants to pursue.


I was so impressed with this whole group.  All of the kids had only two opportunities to practice together before this performance.  There were all different skill levels and once they were together with the guidance of their teacher Yvonne Bennetti they really put their best efforts forwarded and we all were able to enjoy the results.